UNEXPECTED BONUS: ‘JUST A TIDY UP’

The client operates one of Australia’s largest natural resource export terminals with rail, storage and shiploading facilities and associated infrastructure. The company believes strongly that its 100 people who run and support the 24 hour operation are key to the company’s success. They are committed to achieving high standards of excellence in all areas with particular emphasis on health, safety and wellbeing of their team.

The client was keen to, in their words “just clean up the work area”. They were experiencing significant tool loss with expensive replacements, reduced storage space and misplacement of equipment, spare parts and supplies. They needed an easy, effective, do-it-yourself team approach to getting people involved and owning the process of creating and maintaining some order in the workplace.

“We just figured that if we tidied things up a bit, things would be easier and more efficient. But we found equipment and spares we didn’t even know we had! The biggest surprise though was the annual insurance audit. The guy took one look at the place and pretty much on the spot gave us a better rate based on the improved organizational safety. That alone will literally save us tens of thousands each year!”

The site implemented the Improvement 123 Create Order approach themselves, which resulted in much more than just a work area clean up: 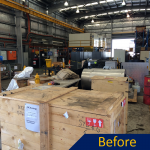 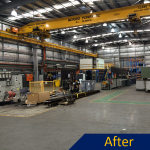